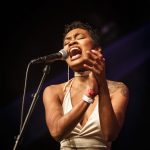 When A Mili and her band step onto the stage there’s no escape. Within minutes she’ll transform the venue into an energetic party! The singer, who moved from Suriname to the Netherlands in 2015 to study and work on her solo career, brings catchy songs with a mix of urban, pop and hip-hop that makes the audience move (every part of) their body. She has scored a number of hits in Suriname and is working on new tracks to be released soon.

A Mili is a born performer and it shows when she’s on stage. Besides her born gift she gained much experience performing on many stages, festivals and television with artists like Jeangu Macrooy, Typhoon and Kenny B.

In 2018 she won the ‘Open Podium Twente’, was selected to tour in the Popronde Nederland 2018, played on the main stage in Melkweg Amsterdam during Popronde Amsterdam Eindfeest, played at the Hemelbestormers showcase festival in one of top venues in the Netherlands, Tivoli Vredenburg, and won the Popronde Paul Smits peoples choice award!